Fenisia is a modern alternative metal band based in Rome, Italy and founded in 2009. The band’s music is strongly influenced by the “deep south” sound of the American southern rock movement. The result is a unique sound blending heavy metal riffs with modern hard-rockin’ song structures. Inspired by the imagery of a rising phoenix, they adopted the original moniker Fenisia to symbolize a rebirth and renewal when forming the band. They wrote some early songs which they performed at local venues, however the “magic” didn’t really start happening until about 2011 when they began integrating their heavy musical style with their passion for the occult, ancient mythology, and alchemy. As their lyrics began to reflect their knowledge of occultism, their sound also evolved further towards a more definite direction of dark, esoteric concepts which ultimately led to the creation of their debut release, a concept album entitled Lucifer. Lucifer was released independently in 2012, and while the album is straightforward, the complex musical logic of the compositions is also somewhat “enlightening” for the few fans of the band who have deciphered the esoteric symbolism therein. The album was recorded at Forward Studio in Rome, and the first single “Damnation’s Ballad” generated stellar reviews from dozens of music blogs and Italian media, as well as significant airplay on 106.6 Radio Rock, the biggest rock radio station in Rome. As the band performed numerous headlining gigs as well as concerts supporting The Misfits and Paul Di’Anno over the next two years, more new material took shape into well-planned compositions. The band has never really forced the writing of new material though. As soon as they had enough songs, they began recording their sophomore album entitled Fenisia Café. The album received praise from local as well as international press and helped to showcase the maturation of the band’s sound. In 2018, the band started writing their third concept album… The Spectator. Two years in the making, the third and final chapter of the band’s conceptual discography is finally ready to be released. Named after the historic enlightenment newspaper founded in London during the early 1700’s, The Spectator was also produced by Ray Sperlonga (American Idol) at Rosary Lane Studios, and mastered by Collin Davis (Imagica, Deeds of Flesh) at Imperial Mastering. The musical journey of The Spectator explores its roots in depth and extends the songwriting a step above the band’s previous releases. The evolution of Fenisia also sheds a light on their Southern’ Rock origins, while melding them with vigorous power cords
of metal to give every track a powerful energy to support the lyrics which tell the final chapter of the story that has been on display with their previous two albums.

The Spectator will be released on October 30, 2020 via Eclipse Records. 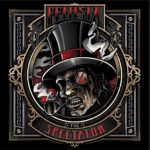